This past weekend, Toby’s friend, and best man at our wedding, Chuckie, was in town from New York so we invited him over for dinner, along with our friends Matt and Jessica. Because we’ll be traveling over the next few weekends, I wanted to create a menu that focused on late summer produce since it will likely feel more fall-like when we return home. I had a plan for what I wanted to make but remained flexible to see what I could get from the farmer’s market. Because I was looking for certain vendors, Oliver and I visited the fabulous Falls Church Farmers Market on a very rainy Saturday morning. I made some additions to the menu after seeing some products that caught my eye and made a substitution on dessert, with somewhat disastrous and messy results (more on that later).

By the time our guests arrived, the rain had let up and we could enjoy a little time outside on a beautiful night, chatting and enjoying drinks around the grill before dinner. Overall, the menu was a delicious celebration of the summer growing season.

We adapted the Hibiscus Tequila Cocktail by substituting Pisco, a Peruvian clear liquor, for the tequila, which was still delicious! We also doubled the amount for this group, which was a wise idea.

I used the Honey Roasted Cherry Tomatoes, from a previous menu, but decided to use them in a new way. I sliced up a baguette I purchased at the farmer’s market, toasted the slices in a 350° oven for about 7-8 minutes. I topped each bread slice with a small scoop of roasted tomatoes, added a little grated Parmesan cheese and chopped up the remaining few leaves of basil left on my basil plant to sprinkle on top. Great way to use up a couple handfuls of cherry tomatoes from the garden.

Toby and I love sausages, so much so that Oliver can ask for ‘more sausage’ at 19 months old. Our local farmer’s markets offer some incredibly delicious options. For this dinner, I picked up some local sausages from Stachowski Brand Charcuterie, based in D.C. I love the variety of sausages they offer and purchased duck, rabbit and kielbasa sausages to try out. The rabbit sausage was my favorite of the evening, but they were all good and full of flavor. I picked up some salmon fillets at the Local Market, as short walk from the farmer’s market in Falls Church.

This ended up being a really delicious side dish and a great way to highlight tomatoes from my garden and super fresh green beans from the market. And I think this recipe would hold up well even using canned tomatoes and supermarket green beans in the winter. 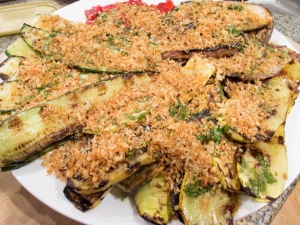 I found the grilled veggie recipe on Epicurious and would agree with all of the 4 fork reviews. This was simple to make in advance, as I made the panko topping and vinaigrette about an hour or two ahead of time and then sliced the veggies, brushed them with olive oil, and let them sit out an hour before grilling. The vinaigrette and panko really elevated these plain grilled veggies and made for a really pretty platter with the purple eggplant, green zucchini, yellow squash and red bell peppers.

I have to admit that I am no fan of mushrooms, but there is a vendor at our local markets who sells a mixed variety box of mushrooms. I’ll usually pick one up if we are having non-meat eaters over or if we are grilling for guests because a simple grilling with a little olive oil, salt and pepper yields rave reviews.

Here’s where things took a detour. I had planned to make individual raspberry panna cottas as I had seen raspberries at the market the week prior, but there were none to be found on that rainy Saturday. So, I decided to buy plums for a baked plum dessert. I thought about doing another plum crumble, which I made for a previous menu, but decided to go a different route and found a plum tart recipe that looked fairly simple. I noted many reviewers comments that the filling didn’t set up so I wanted to add a bit more cornstarch to the recipe to help the filling gel a little better. However, the recipe as written yields two tarts and since I only wanted one tart, I had to halve the recipe. I don’t know about you, but I have the worst time remembering to halve every ingredient as I go along! So, I made it most of the way through, but ended up with too much sugar and cornstarch with my plums. I thought if I held back about half of the thick sugar syrup I would be ok, however, it just never set up, even after it cooled down. While it was so pretty to look at, once I sliced in to the tart, the liquid just flowed everywhere, including our floor! Eek! I was able to salvage some of the juice (before hitting the floor!) and added that to each slice, and with the addition of the cinnamon vanilla whipped cream with the delicious crust, it was still more than edible. I’m not sure I’d try this one again, even though the big error was largely my own doing, as I wanted to plums to breakdown a bit more in this tart. I might try the crust again with something else, as the hint of lemon in the dough really added great flavor and not having to roll it out was a big time and mess saver.