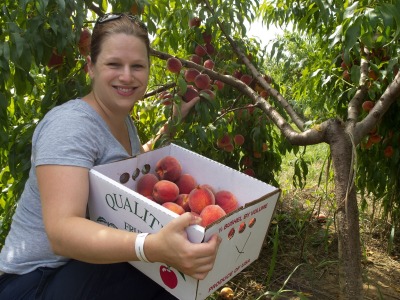 I grew up in a rural town in Illinois and spent quite a bit of time at my grandparents farm, just outside of town. The farm had been host to various animals and agriculture over the years, but by the time I came around, most of the land was dedicated to growing corn or soybeans and hosting a few rabbits, chickens and cows. There were also a few fruit trees, including a few apples trees and one lone peach tree. In the fall, there were plenty of apples to be picked, but I don’t think that peach tree ever produced a single peach.

I don’t recall eating many in-season peaches as a kid, but since moving to the east coast and becoming a regular at farmer’s markets, I eagerly await the arrival of peach season. To bite in to a ripe, fleshy peach and have so much juice ooze out that you need a napkin to catch the spillage? That is summer. 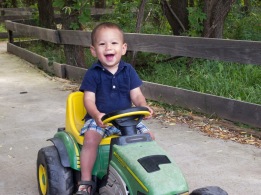 In an effort to expose Oliver to as many farm experiences as I can, we visited a Great Country Farms in Bluemont, VA for their Peach “Fuzztival”. The farm was really geared towards the half pint in our group with several play areas for little ones, a racetrack with mini John Deere tractors and lots of farm animals! After seeing him on the tractor, I think he just may have some farm boy in him.

At 18 months, he loves animals and gets so excited when he can shout out the name of the animal and the sound they make too. We saw pigs (oink!), baby goats (maa!), ducks (quack!), chickens (cluck!) and cows (moo!). Oliver even had a face off (behind a fence, of course) with a baby goat. 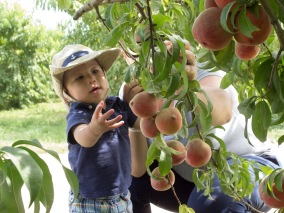 After visiting the play areas and enjoying a delicious breakfast of peach pancakes, we visited the peach orchard. Now, I went in to that orchard with the intention of only picking a few peaches, a pound or two, to make a peach crisp for dessert that night. However, the only options for containers were big bushel boxes, so who was I to not fill that thing up?! Once we got to the orchard, the trees were just bursting with peaches! I easily filled the box in just a few minutes, even with Oliver getting in on the harvesting action. 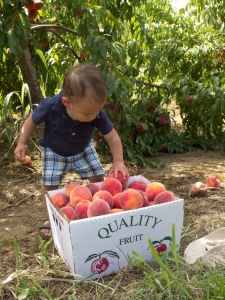 After Mr. Oliver’s careful inspection, we weighed the box to pay and that’s when the realization hit me. What was I going to do with 25 pounds of peaches? I’ve done some peach canning in the past, but wasn’t planning to do anything with peaches this year as I had just done some big batches of jams the past couple weekends and was looking to take a break this weekend. But, lo and behold, here I was with some delicious peaches that begged to be preserved. On the car ride back, my mind started to click through what I wanted to make. After looking through some canning books when I got home, I settled on a peach salsa, peach butter, lemon thyme peach jam, peach vinegar (so easy!) and that peach crisp. I even had enough left over to make a peach and blueberry tart to enjoy with friends at the end of the week. I’ll be posting a couple of those recipes soon, so check back for those.

One thought on “Peach pickin’”